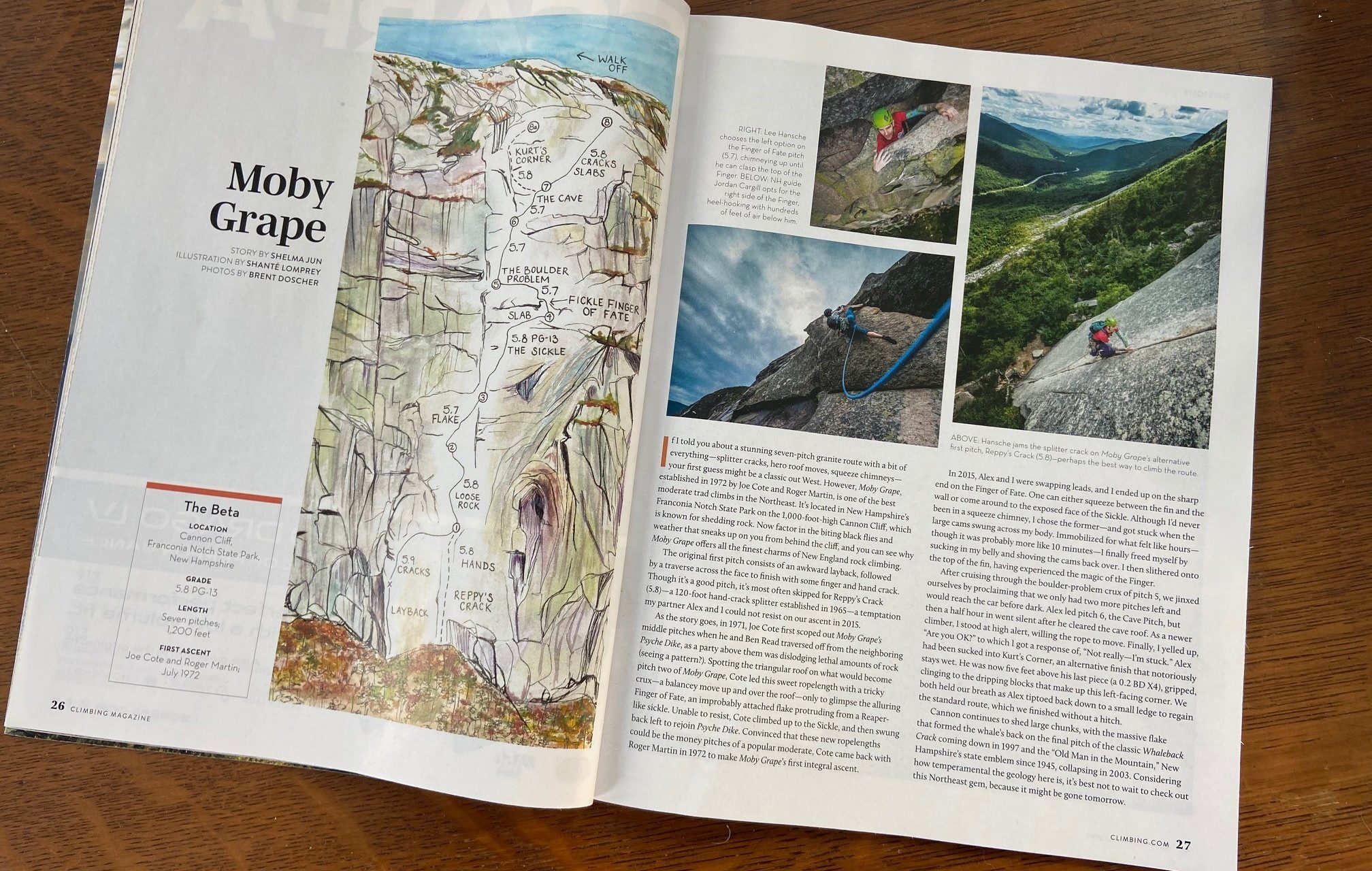 When I received the winter 2020 edition of Climbing Magazine, I was thrilled to see that Moby Grape was highlighted on pages 26 and 27. At first glance, the piece looks amazing. There’s a beautifully artistic topo by Shante Lomprey and three magnificent photos by Brent Doscher of Lee Hansche and Jordan Cargill. It was really great to see that Cannon Cliff get some exposure in the national climbing press.

Then I looked a bit closer and realized that this piece was full of errors.

Overall, the topo does a great job of showing elements of Cannon Cliff that are NOT on the route. Unfortunately, most of the display and wording related to the route is deeply flawed. Let’s starting at the bottom and working our way up:

I should also note that the locations of the belays shown are not the preferred spots. As with most long trad routes, you can break up pitches anywhere you want, but the best locations for belays are fairly different from what is portrayed in this topo.

As mentioned above, the three photos chosen to go with this piece are beautiful with great composition. But two of the three pictures are of one single formation – the Fickle Finger of Fate. It’s a unique and cool feature to be sure, but when only three pictures are meant to show off the greatness of a 1,200 foot route, why use up so much space on one feature? This is especially the case when most climbers ascend the right side of the Finger, leaving the short, awkward squeeze chimney on the left side alone. There are other parts of the climb that are incredibly interesting and photogenic, including, but not limited to: the Triangle Roof, the traverse to The Sickle, the tricky, slabby section below the Cave, the outrageous Cave Move, the awesome laybacking up Kurt’s Corner, and the finishing cracks on the standard finish.

The best I can say about the short article accompanying the topo is that it includes some useful history about the route. The author seems to have climbed the route once, five years ago, when she was a self-described “newer climber” who had something approaching an epic on the route.

She includes a number of comments that lead those of us who know the route to scratch our heads. Apparently, she isn’t aware that the Sickle is a different rock formation from the Finger of Fate when she writes that, in reference to the Finger, “one can either squeeze between the fin and the wall or come around to the exposed face of the Sickle.” After choosing to climb the left side of the Finger, she describes getting stuck when “the large cams swung across [her] body.” This is not a route that requires large cams – the biggest I’m aware of anyone bringing is a #4 (although I suppose any gear on one’s harness can get them stuck in a squeeze). The author goes on to describe her partner getting “sucked into Kurt’s Corner,” even though it is far more intricate to get to than the standard finish, and then being “gripped” on wet rock above a lone #0.2 cam. Once you get to Kurt’s Corner, it is easy to sew it up with gear, so it’s not clear where her partner was during this situation.

Beyond these dubious elements is the overall tone of the piece, which repeatedly refers to rockfall and ends with the ominous statement of “it’s best not to wait to check out this Northeast gem, because it might be gone tomorrow.” It is absolutely true that rockfall happens on Cannon. But this is also true on cliffs such as Half Dome, where more than two pitches of the Regular route were wiped out by rockfall in 2015, or El Capitan, where multiple massive rockfalls have occured recently. The entire Bonatti Pillar on the Aiguille du Dru collapsed in 2005! Do articles about Half Dome or El Cap or the Alps dwell on the potential for rockfall and warn that climbers should hurry since the route might fall down soon? The reality is that rockfall happens on big walls and we need to use good mountain sense and accept some objective risk when climbing in such grand environments.

As I mentioned at the start, I think it is great when the national climbing press focuses attention on New Hampshire climbing and particularly on Cannon. Moby Grape is a truly magnificent route. It is long and sustained, but never too challenging and certainly doesn’t have any throwaway pitches. It is incredibly varied and requires the full range of granite rock climbing skills. And every pitch has at least one really memorable and fun feature. While Shelma Jun was completely correct in writing that it “is one of the best moderate trad climbs in the Northeast,” I would go further by removing some of those qualifiers. In fact, one of my quests in climbing has been to find a long 5.8 anywhere that equals Moby Grape. It’s an interesting exercise that has so far stymied me. I have climbed a lot of long 5.8s and haven’t come across anything that comes close in Yosemite, the Bugaboos, the Tetons, the High Sierras, or anywhere in the East. (Let me know if you have any suggestions.)

So hopefully you can understand how very disappointed I was when something that should be so positive proved to be a huge disappointment.

Shante Lomprey is clearly a talented artist and her topo is a beautiful work of art. But it is inaccurate. The artist noted on Instagram that she had never heard of the route before drawing the topo and that it was a lot of work to do research on it from afar. She went on to state that “now a trip to New Hampshire may be in order.” Did anyone who knows the route even look at the topo before it was published?

While it is good that Shelma Jun included some good history related to the route in the short piece accompanying the topo, it seems very odd that the introduction to such an amazing route would be made by someone who had a single experience on the route years earlier. I climbed the East Buttress of Middle Cathedral Rock a dozen or so years ago. Does that make me the right person to write an article about what makes it special?

All of this leads to one basic question: Did anyone at Climbing Magazine do any fact checking? Did anyone at Climbing Magazine try to follow up to see if the topo or text was accurate? Did no one notice that the topo shows 8 pitches but the “Beta” section and the text refers to the climb being 7 pitches? (Yes, it is a trad route that can be broken up in any number of combinations, but shouldn’t the article at least be internally consistent?)

Maybe I am overreacting. Maybe I am too close. Maybe I am focusing on things that don’t matter. With all of this in mind, I hope that this piece helps draw attention to the amazing climbing here in the Granite State. I hope people are attracted by the beauty of the topo (but don’t try to follow it!). I hope that the pictures inspire folks to come to the Notch prepared to do some adventure climbing on our big, awesome wall.