Where do we start?

Climbing is an incredibly varied activity. Quite a few different and often overlapping specialties fit under the broad umbrella of “climbing.” Climbing can take place on big mountains, small cliffs, or even indoors. It can involve ascending natural or man-made rocks, frozen streams of ice, snow, glaciers, or a combination of these surfaces. It can be as short and accessible as climbing a ten-foot-tall boulder in your backyard or as big and inaccessible as summiting an 8,000-meter high peak half way around the world. It can involve literally tons of specialized gear or no gear at all. All of this begs the question: where do we start?

Let’s begin with a very quick summary of some of the key disciplines of climbing and then go into a bit more depth about the terminology and equipment that you might use at an indoor climbing gym like N3C. There is no way that this page could possibly tell you everything there is to know about climbing, but hopefully, we can at least provide an introduction.

As mentioned above, there are different, sometimes overlapping ways to categorize various different kinds of climbing. As with many skills that have evolved and fragmented over time, there is some disagreement even within the climbing community as to the specific definitions of or boundaries between the various climbing disciplines.

Before going into details on the various ways to categorize climbing, a general concept that is used in climbing is the notion of how “technical” a particular climb is. The more “technical” a climb is, the greater the level of climbing-specific skill that is necessary to ascend it. Non-technical climbing is generally considered to be “scrambling” – which basically means that while you may need to use your hands for balance and to occasionally pull yourself over an obstacle, most people do not see the need for a rope.

A broad category that encompasses the ascent of natural or man-made rocks. 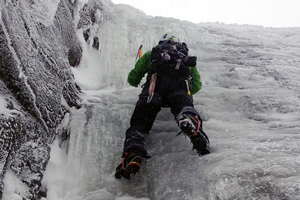 Ascending ice (frozen water) using specialized equipment. Ice climbers hold onto ice axes (or “ice tools”) with sharp metal picks that they swing into the ice. They affix metal spikes, called crampons, to their boots, which they kick into the ice. 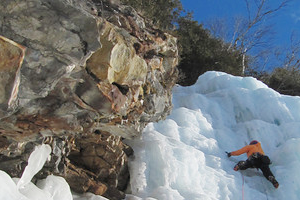 Ascending a mixture of rock and ice. Mixed climbing involves the use of crampons and ice axes, but also includes ascending rock while still using those tools.

Size / Height of the Climbing Objective

Bouldering – Climbing short routes that do not require the use of a rope. The term comes from the practice of climbing on boulders. This is often considered the purest form of climbing because it focuses on the athletic motion of climbing and uses a minimal amount of gear: no harness, rope, or hardware. You don’t need any specialized gear to boulder, although most boulderers use climbing shoes, chalk to dry their sweaty hands, and a pad to protect their falls. As a side note, bouldering is exploding in popularity faster than any other sort of climbing.

Cragging – A crag is a British term for a small cliff or rock outcropping. Cragging generally means climbing on such cliffs. It has also been expanded to encompass climbing on a relatively small cliff that is easy to get to and, in case of emergency, get off of. Some folks have further expanded the definition of the term to include indoor climbing. Most people would agree that climbing at Rumney is cragging while climbing on Cannon Cliff is not.

Big Wall Climbing – Traditionally, big wall climbing involved very long (1,000 feet or longer) routes, on consistently steep rock, with sustained difficulty (usually requiring aid climbing techniques), and typically requiring haul bags and a portaledge (to spend one or more nights hanging from the wall). Any of the full length routes on Yosemite’s El Capitan count as the epitome of big wall climbing, but some routes on Cannon Cliff are also considered big walls.

Mountaineering – This is the granddaddy of climbing. You look up at a big mountain and you want to get to its top. Mountaineering often involves a mixture of challenges to deal with, including altitude, weather, and remoteness. Historically mountaineering is more focused on getting to the top than it is focused on the technical difficulty of ascending the rock, snow, or ice.

Alpine Climbing – A term that is somewhat similar in meaning to mountaineering, alpine climbing refers to climbing in an alpine environment. Some argue that mountaineering becomes alpine climbing when the technical difficulty of ascent becomes the crux of the route, as opposed to negotiating alpine elements (weather, altitude, etc.).

When most of us think about climbing, we imagine individuals ascending using their own power. This is what climbers call “free climbing.” It is the most common form of climbing. Climbing something free means that the individual did not use anything man-made to help them make forward progress. It has nothing to do with whether or not a rope is involved to catch the climbing should she fall. (Most free climbing involves climbing with a rope to catch a fall!)

Climbers use aid when they cannot (or simply choose not to) climb something free. “Aid climbing” is when a climber uses the assistance of objects to help them ascend: bolts, pitons, the rope itself, or some other form of climbing protection.  Aid climbing involves a great deal of specialized gear – including hanging ladders known as “aiders” or “etriers” to stand on while placing the next piece of protection. Aid climbing has its own rating scale from A0 to A5 (or potentially A6) based on the difficulty of placing gear and the ability of the gear to hold a fall. Many routes that were originally aid climbed have subsequently been free climbed.

To climb “solo” means to climb without being attached to another person. There are several types of soloing:

Free soloing is climbing without a rope on a route that most people use a rope when climbing. This is what climbers generally think of when they think of soloing. Some climbers are particularly renowned for their free soloing. Alex Honnold, Dean Potter, Peter Croft, and the late, great John Bachar are several such climbers.

Rope soloing is climbing alone using a rope to protect falls. One can top rope solo or lead solo. Either way, rope soloing involves a specialized process of self-belaying while climbing.

Deep water soloing, also known as psicobloc, is a sub-type of free soloing that involves climbing cliffs that overhang water so if the climber falls they land in the water.

Free BASE is a type of free soloing where the only protection is a BASE parachute. The idea is that the climber can turn a fall into a BASE jump off the face of a cliff. This is obviously only attempted by individuals skilled at both climbing and BASE jumping.